It is a powder-snowy afternoon in December of 1906.

Asougi Kazuma is on a stroll with Naruhodou Ryuunosuke. This is much like it has been for a long time. There had been an interruption in their proximity of both a physical and emotional kind, but now things are right again, not back to the way they were before (as nothing will ever be back to the way it was “before,” a simple reality of life) but still in a place that they both find satisfactory. They walk side by side, their feet following the same pathway which they have taken since six years ago. Their hands are warmed by baked sweet potatoes, which in turn keep their mouth-watering temperature as they are shielded from the wind by gloved hands. Naruhodou’s bag is noticeably emptier; he is a fast eater, and a lover of sweets. Kazuma loves that about him.

Naruhodou has somehow gotten potato crumbs on his face. He brushes them off, making a joke about how the bugs will get their share of yaki imo as well now. Kazuma tells him that the bugs can’t get them if Naruhodou drops them onto his clothes, and dusts off the bits of food clinging to his scarf and hanten. The scarf matches the color of Kazuma’s outerwear, just as Kazuma’s scarf matches Naruhodou’s hanten; a set made together, mismatched on purpose. Naruhodou’s mother had made them as a gift, her way of approving wholeheartedly of her child and his closest confidante.

The walk continues as it usually does, over the short bridge spanning the nearly-empty canal and toward the Imperial Yuumei grounds. Both of them have graduated by now, but there is a nostalgia for their young years that had been interrupted with far graver a situation than either of them should have dealt with. This cannot be changed, they understand this; there is no harm in reminiscing, however. The large tree whose branches they stood underneath and hid from view to share quiet moments of solitude is thanked for its wide trunk and excellent placement. The cats who once meowed their displeasure for their lack of edible gifts are placated with apologies in the form of sweet potato bites (but not too many, Kazuma warns, as human foods are not good for animals). The cold wind who blows past them is asked where its presence had been in the hot summer months.

The pathway through the grounds leads into the footsteps to a shrine whose stairs they climb for the exercise more than to visit the shrine itself. It is on the way down that Kazuma glances to his side, as he has done many times today.

Naruhodou has bits of sweet potato on his face again. He has taken too big of a bite again, and is chewing through it with a little difficulty. Snowflakes land in his lashes, in his scarf, on the tip of his nose for just a brief moment before melting into nothing. The wind ruffles his hair, his short bangs fluttering as they are caught up in the breeze. His breath fluffs in a visible puff before dissipating, replaced by another warm exhale of white just as quickly.

He is the most beautiful sight that Kazuma has ever seen.

Kazuma breaks the usual stride of their walk. He takes the next step down much more quickly, and turns around to face Naruhodou.

Naruhodou looks down at Kazuma, mild surprise on his face.

“Naruhodou,” Kazuma says. “Will you marry me?”

“Of course I would,” Naruhodou replies, as naturally as the wind and the snow.

He does not understand what Kazuma intends. This too is another reason why Kazuma finds him beautiful; Naruhodou’s straightforward honesty is not cute or endearing, but rather comforting. Kazuma tries once more.

To marry would not change anything in their lives. They would still live together, work together, walk together. There would be no notice paid by the world, no grand announcement and no wonderous celebration.

Well, that is not true. Kazuma knows a few who would jump at the news.

Naruhodou’s eyes widen in proper shock this time. He stands with his mouth slack and stuffed with sweet potato, face stinging from the cold, scarf dusted with crumbs, hair blown about from the wind. Asougi looks up at this view of Naruhodou, and feels his heart settle peacefully. 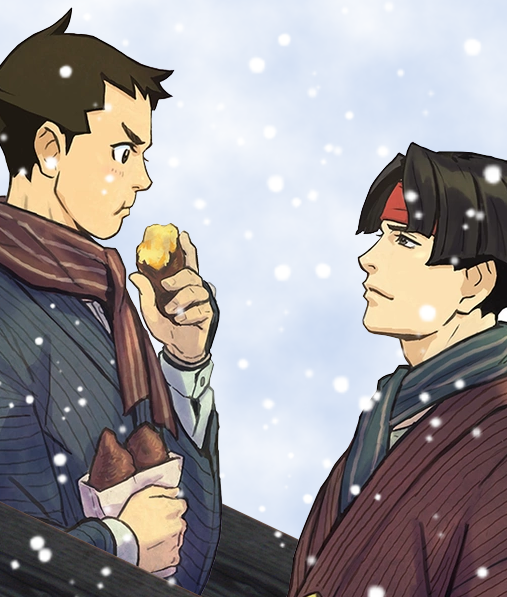 “Yes,” Naruhodou says once he has swallowed all of his food and ensured that he will not choke in his haste. “I will.”

Kazuma climbs the gap between himself and Naruhodou and kisses him. The winter cold guards their solitude, the wind pushes away at anyone who might intrude. At their feet, the snow continues to pile, covering the tracks they have left in their journey.